NO has been shown to mediate angiogenesis; however, its role in vessel morphogenesis and maturation is not known. Using intravital microscopy, histological analysis, α–smooth muscle actin and chondroitin sulfate proteoglycan 4 staining, microsensor NO measurements, and an NO synthase (NOS) inhibitor, we found that NO mediates mural cell coverage as well as vessel branching and longitudinal extension but not the circumferential growth of blood vessels in B16 murine melanomas. NO-sensitive fluorescent probe 4,5-diaminofluorescein imaging, NOS immunostaining, and the use of NOS-deficient mice revealed that eNOS in vascular endothelial cells is the predominant source of NO and induces these effects. To further dissect the role of NO in mural cell recruitment and vascular morphogenesis, we performed a series of independent analyses. Transwell and under-agarose migration assays demonstrated that endothelial cell–derived NO induces directional migration of mural cell precursors toward endothelial cells. An in vivo tissue-engineered blood vessel model revealed that NO mediates endothelial–mural cell interaction prior to vessel perfusion and also induces recruitment of mural cells to angiogenic vessels, vessel branching, and longitudinal extension and subsequent stabilization of the vessels. These data indicate that endothelial cell–derived NO induces mural cell recruitment as well as subsequent morphogenesis and stabilization of angiogenic vessels. 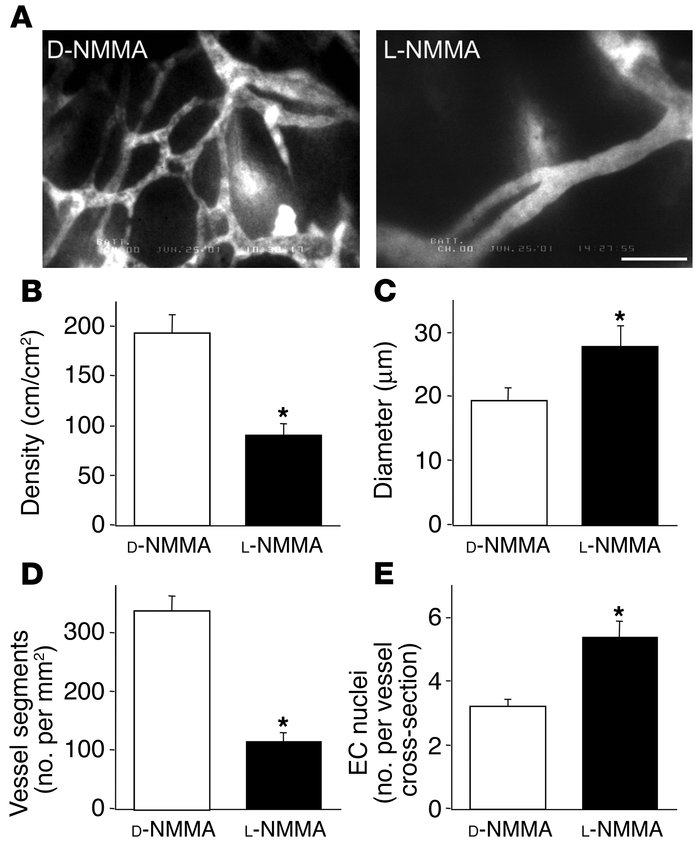