Human and murine cerebral malaria are associated with elevated levels of cytokines in the brain and adherence of platelets to the microvasculature. Here we demonstrated that the accumulation of platelets in the brain microvasculature can be detected with MRI, using what we believe to be a novel contrast agent, at a time when the pathology is undetectable by conventional MRI. Ligand-induced binding sites (LIBS) on activated platelet glycoprotein IIb/IIIa receptors were detected in the brains of malaria-infected mice 6 days after inoculation with Plasmodium berghei using microparticles of iron oxide (MPIOs) conjugated to a single-chain antibody specific for the LIBS (LIBS-MPIO). No binding of the LIBS-MPIO contrast agent was detected in uninfected animals. A combination of LIBS-MPIO MRI, confocal microscopy, and transmission electron microscopy revealed that the proinflammatory cytokine TNF-α, but not IL-1β or lymphotoxin-α (LT-α), induced adherence of platelets to cerebrovascular endothelium. Peak platelet adhesion was found 12 h after TNF-α injection and was readily detected with LIBS-MPIO contrast-enhanced MRI. Temporal studies revealed that the level of MPIO-induced contrast was proportional to the number of platelets bound. Thus, the LIBS-MPIO contrast agent enabled noninvasive detection of otherwise undetectable cerebral pathology by in vivo MRI before the appearance of clinical disease, highlighting the potential of targeted contrast agents for diagnostic, mechanistic, and therapeutic studies.

Data from animals with CM and LIBS-MPIO contrast agent injection. 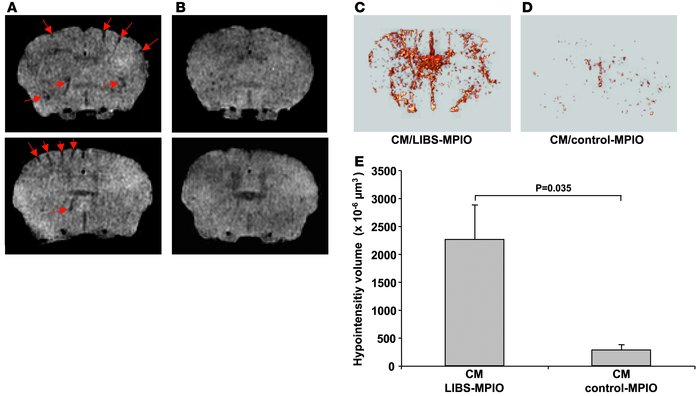