Human and murine cerebral malaria are associated with elevated levels of cytokines in the brain and adherence of platelets to the microvasculature. Here we demonstrated that the accumulation of platelets in the brain microvasculature can be detected with MRI, using what we believe to be a novel contrast agent, at a time when the pathology is undetectable by conventional MRI. Ligand-induced binding sites (LIBS) on activated platelet glycoprotein IIb/IIIa receptors were detected in the brains of malaria-infected mice 6 days after inoculation with Plasmodium berghei using microparticles of iron oxide (MPIOs) conjugated to a single-chain antibody specific for the LIBS (LIBS-MPIO). No binding of the LIBS-MPIO contrast agent was detected in uninfected animals. A combination of LIBS-MPIO MRI, confocal microscopy, and transmission electron microscopy revealed that the proinflammatory cytokine TNF-α, but not IL-1β or lymphotoxin-α (LT-α), induced adherence of platelets to cerebrovascular endothelium. Peak platelet adhesion was found 12 h after TNF-α injection and was readily detected with LIBS-MPIO contrast-enhanced MRI. Temporal studies revealed that the level of MPIO-induced contrast was proportional to the number of platelets bound. Thus, the LIBS-MPIO contrast agent enabled noninvasive detection of otherwise undetectable cerebral pathology by in vivo MRI before the appearance of clinical disease, highlighting the potential of targeted contrast agents for diagnostic, mechanistic, and therapeutic studies.

Platelet and leukocyte accumulation in the brain following the intrastriatal injection of TNF. 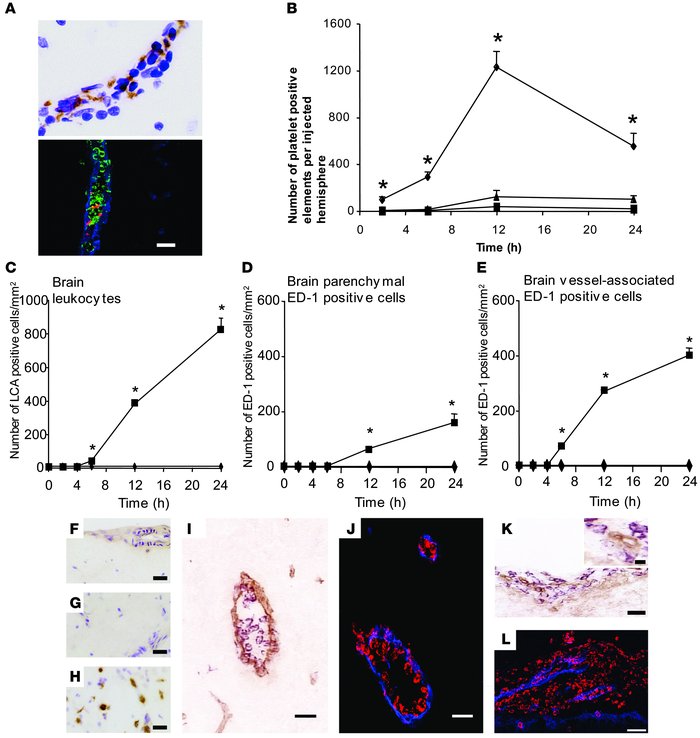 () Top: Platelets localized within blood vessel in the brain close to the injection site (brown, DAB), visualized by cresyl-violet counterstain. Bottom: Confocal triple-labeling immunocytochemistry identified platelets (red) and ED-1–positive cells (green) inside a vessel with an intact endothelium, as revealed by GLUT1 (blue) staining. () Number of GPIIb/IIIa-positive elements in the injected hemisphere following microinjection into the striatum of 1 μg TNF (diamonds), 1 ng IL-1 (triangles), or saline (squares) in a volume of 1 μl for rats or 0.5 μl for mice. (–) Total brain leukocytes, as identified by leukocyte common antigen (LCA; ), ED-1–positive recruited monocytes and activated microglial cells present in the brain parenchyma (), and ED-1–positive recruited monocytes associated with the luminal portion of the brain vasculature (), detected by immunohistochemistry over 24 h following intrastriatal injection of TNF (squares) or saline vehicle (diamonds). (–) Representative photographs showing the absence of leukocytes in the meninges () or parenchyma () and their presence in the parenchyma following injection of TNF () after immunohistochemical labeling for leukocyte common antigen. (–) Double-labeling immunocytochemistry ( and ) and confocal imaging ( and ) of ED-1–positive cells and the brain vasculature (as identified by GLUT-1) highlight the differences in mononuclear cell recruitment patterns in the parenchyma ( and ) and meninges ( and ). Note in the meninges the presence of large numbers of ED-1–positive cells (blue, VIP; red, FITC) that appear to have free passage from the vasculature (brown, DAB; blue, AF-636) compared with the same cells in the parenchyma that appear vessel associated. (, inset) High-power view of extravascular ED-1–positive cells. ELISA results are expressed as pg MCP-1/mg total protein ± SEM. Cell numbers in brain are expressed per mm2 ± SEM. * < 0.05 versus vehicle control. Scale bars: 20 μm ( and –); 40 μm ( and ); 10 μm (, inset).