Study groups were established according to isolated TECs from CRC tissues that had an angiostatic Th1-TME or a non-Th1 control-TME as well as comparable microvessel densities and senescence. 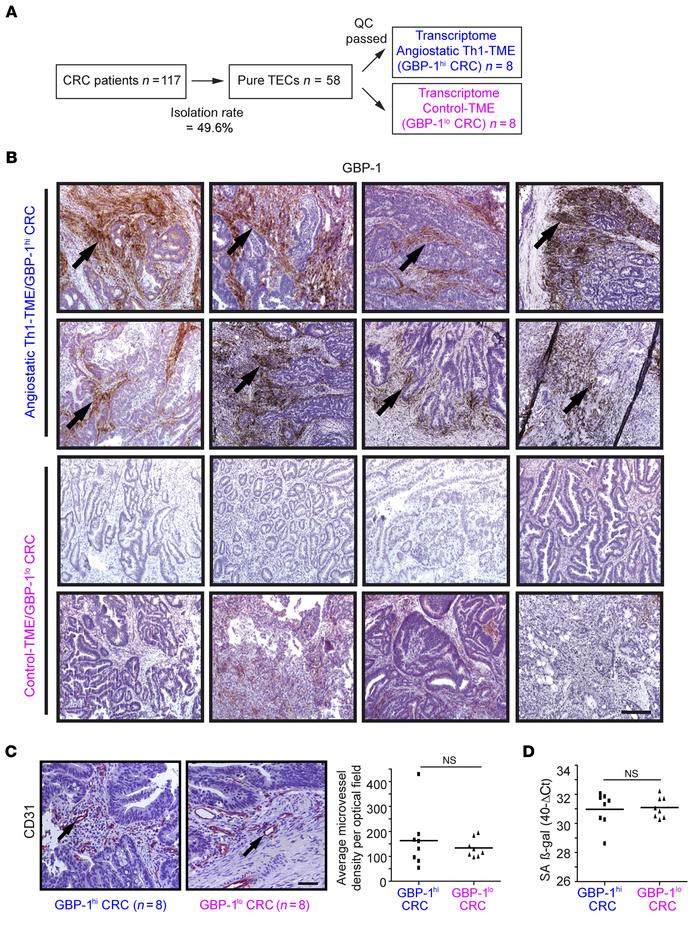 () In total, 58 pure TEC cultures were isolated from 117 patients using a CD31-based MACS protocol. The isolation success was 49.6%. After application of stringent quality criteria (QC) (see main text), 16 TEC cultures derived from CRC tissues with an angiostatic Th1-TME ( = 8, blue) and control-TME ( = 8, pink) were subjected to transcriptome analyses. () For the study, all tumors with angiostatic Th1-TME (GBP-1hi) and those with a non-Th1 control-TME (GBP-1lo) and less favorable prognosis were differentiated by GBP-1 expression (brown, arrows) using IHC. Scale bar: 250 μm. () Microvessel density was detected by CD31 staining (left panel) in tumors from . For each tumor, the average number of microvessels per optical field was calculated and is shown (right panel). Scale bar: 50 μm. () RT-qPCR of SA β-gal expression in the tumors from . The expression levels are given as 40-Ct values. ( and ) Statistical significance was determined by Student’s test. Mean values are indicated by line; NS, not significant.