In the past decade, new approaches have been explored that are aimed at restoring functional β cell mass as a treatment strategy for diabetes. The two most intensely pursued strategies are β cell replacement through conversion of other cell types and β cell regeneration by enhancement of β cell replication. The approach closest to clinical implementation is the replacement of β cells with human pluripotent stem cell–derived (hPSC-derived) cells, which are currently under investigation in a clinical trial to assess their safety in humans. In addition, there has been success in reprogramming developmentally related cell types into β cells. Reprogramming approaches could find therapeutic applications by inducing β cell conversion in vivo or by reprogramming cells ex vivo followed by implantation. Finally, recent studies have revealed novel pharmacologic targets for stimulating β cell replication. Manipulating these targets or the pathways they regulate could be a strategy for promoting the expansion of residual β cells in diabetic patients. Here, we provide an overview of progress made toward β cell replacement and regeneration and discuss promises and challenges for clinical implementation of these strategies. 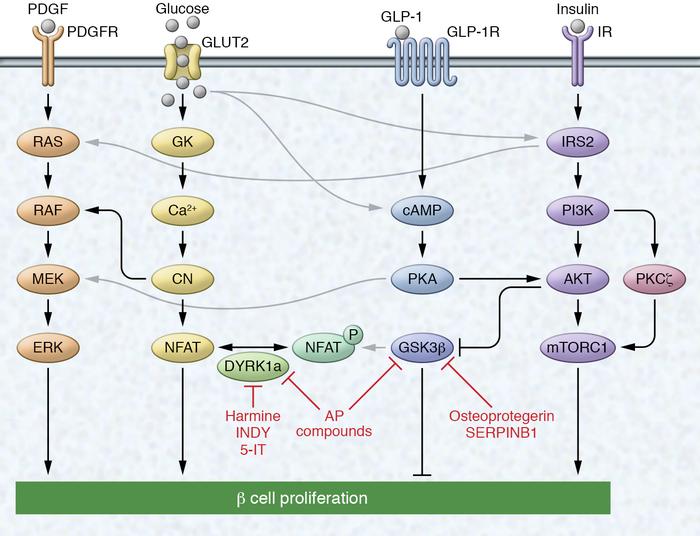 Growth factors (PDGF), nutrients (glucose), and hormones (GLP-1 and insulin) have been shown to induce β cell proliferation by activating both canonical and noncanonical mitogenic pathways. Activation of their respective receptors induces signaling via the ERK (also called MAPK) signaling pathway either directly (in the case of PDGF) or via crosstalk mechanisms. Glucose, GLP-1, and insulin have been shown to activate mitogenic signaling via the PI3K/AKT/mTOR pathway. Glucose signals through the calcineurin/NFAT and ERK pathways, while signaling via GLP-1 induces cAMP synthesis to induce proliferation. Small molecules/compounds have been identified that target proteins in these signaling pathways, inhibiting either DYRK1a or GSK3β, both of which phosphorylate NFAT, sequestering it in the cytoplasm. Black and gray arrows indicate canonical and noncanonical signaling, respectively. The depicted pathways regulating β cell proliferation are mainly based on evidence in rodents and do not represent a comprehensive overview of all published work. Compounds shown to induce human β cell replication are indicated in red. AP, aminopyrazine; 5-IT, 5-iodotubercidin; Ca2+, calcium; CN, calcineurin.