Following migration of primordial germ cells to the genital ridge, oogonia undergo several rounds of mitotic division and enter meiosis at approximately E13.5. Most oocytes arrest in the dictyate (diplotene) stage of meiosis circa E18.5. The genes necessary to drive oocyte differentiation in parallel with meiosis are unknown. Here, we have investigated whether expression of spermatogenesis and oogenesis bHLH transcription factor 1 () and coordinates oocyte differentiation within the embryonic ovary. We found that SOHLH2 protein was expressed in the mouse germline as early as E12.5 and preceded SOHLH1 protein expression, which occurred circa E15.5. SOHLH1 protein appearance at E15.5 correlated with SOHLH2 translocation from the cytoplasm into the nucleus and was dependent on SOHLH1 expression. NOBOX oogenesis homeobox (NOBOX) and LIM homeobox protein 8 (LHX8), two important regulators of postnatal oogenesis, were coexpressed with SOHLH1. Single deficiency of or disrupted the expression of LHX8 and NOBOX in the embryonic gonad without affecting meiosis. -KO infertility was rescued by conditional expression of the transgene after the onset of meiosis. However, or transgene expression could not rescue -KO infertility due to a lack of or expression in rescued mice. Our results indicate that and are essential regulators of oocyte differentiation but do not affect meiosis I. 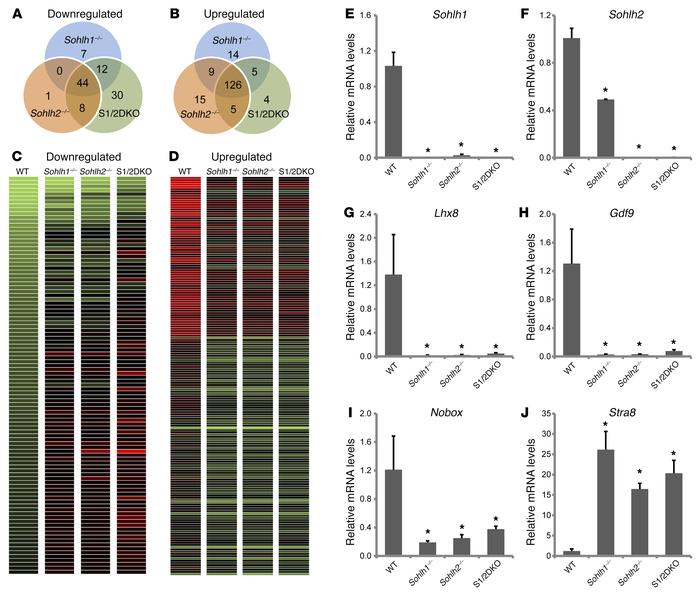 Venn diagrams show overlap and differences in the number of downregulated () and upregulated () transcripts as well as transcript heatmaps ( and ) derived from , , and S1/2DKO mice when compared with the WT newborn ovary transcriptomes. Transcript data were derived from RNA-seq, and genes that showed a greater-than 2-fold change compared with WT were included. (–) Quantitative PCR analyses derived from RNA-seq of select genes such as (), (), (), (), (), and () in WT, , , and S1/2DKO mice ( = 6 per group). was used for normalization, and ΔΔCt was calculated for the fold change. Error bars indicate the mean ± SD. * < 0.05, by 2-tailed Student’s test (compared with WT). Data are representative of at least 3 independent experiments.